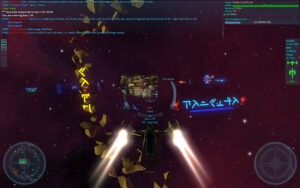 Hey friends, and welcome to Friday! It has been a helluva week my friends. I’ve been so busy with work I’ve barely had energy for gaming, seriously. First off, the only video from this past week was our sojourn into Borderlands 2, which was a ton of fun:

Besides that, I decided to, after a break, return to Vendetta Online for the first time in a while. I resubscribed and played a bunch the other night, and had fun. It’s relaxing, and it feels more meaningful in a way Elite doesn’t. I could play Jumpgate, sure, but I’m a bit burnt out on that as well, oddly. I guess VO still has a “new shine” on it, while the others are a bit…tired in my brain right now. I also spent some time with War Tech Fighters, which is surprisingly fun and challenging, and I’ll be definitely covering it since it does have space stuff, which I didn’t even realize! I also spent time with Stellar Tactics because it keeps getting updated, and I’m enjoying it, but I wanna get to the spaceship! ;) I also spent time with EVE Online and Brigador as well, both of which have been a ton of fun! Brigador is even better with the addition of horns. ;)

This weekend I won’t have a ton of time to game, since we’re having a movie day tomorrow, but I do hope to get some time in with Tooth and Tail, which I just got and cannot WAIT to play. I love RTS and procedural generation, so I’ve been excited about this one for MONTHS. I also hope to return to LOGistICAL and Lord of the Rings Online for some relaxing, podcast-listening gaming.

Now I’ll tell y’all, the next week or so is gonna be GREAT for gaming, as Nicole is playing in a local production of The Nutcracker, so I am gonna have a TON of time on my hands. I’ll likely record some stuff for the channel like Star Control: Origins and Star Traders: Frontiers along with getting more gaming in just for myself. Really looking forward to a lot of me time. I mean, I love Nicole so much, but man, me time is great. ;)

OMG so much news you guys. Let’s do this.

Finally, in sales, Humble is having a big sale (which is where I got Tooth and Tail), so head over there and check it out!

That’s it y’all! Have a great weekend, and I’ll see you next week!