A few short months ago, Strike Suit Zero was released and, while I mostly enjoyed it, I found it to be too difficult and frustrating for the sake of being difficult and frustration (or, at least that’s how it felt). The game, with it’s multi-tiered checkpoint system and somewhat ridiculous mission objectives could turn fun into frustration in short order. Since my review, the developers have implemented checkpoint-saving, difficulty levels and better targeting systems to make the game more accessible, which is awesome, but I’ve not found much cause to return since those features were added. Imagine my surprise when, seemingly out of nowhere, a stripped down version of Zero was announced entitled Strike Suit Infinity. Rather than being a story/mission-based game, this one is just a score-chasing game where all you do is kill waves and waves of enemies. Does this tighter focus mean a better game? Read on to find out, my friends…

Returning to the frantic combat found in Zero and now Infinity found me very rusty at first. After at first trying with a mouse, I found I still did better with a full HOTAS setup (which is easy to…set up…) and found myself again striving to find the rhythm of switching between fighter and Strike Suit modes, which is the core of the combat in these games.  It took a few sessions, but I did find myself regaining that rhythm I’d had during my last visit to this universe. While much of the beats of combat are the same (which can be good or bad depending on how you look at it), the most notable and immediate improvement is the new targeting system, which I have to say, I’m quite fond of (and I’ll talk about more in a moment).

The game starts you off with a tutorial mission, which can branch in two ways: The first is a tutorial on the flight and targeting systems, while the second is a taste of combat itself. All of this takes place in a supposed “UNE Combat Simulator” so there’s no real risk in these bouts of combat as there is in Zero, which is rather refreshing. I also found this tutorial helpful for folks like me who might’ve lost their edge since their last time in a Strike Suit. The tutorial also does a good job covering the basic systems and getting you ready for your upcoming bouts.

Before your bouts, or in-between them, you’re given an amount of credits to purchase wingmates, which can be of various types or levels. Credits are also gained during the rounds themselves, so the better you do, the more or better reinforcements you’ll be able to field. This allows you to tweak the rounds a bit and make them more varied. Depending on how you do, you can also receive upgrades to ship systems as well as upgraded weapons, which is a nice carrot to keep one following the stick. Once you’ve chosen your round (the game has eighteen, but you start with one) and your ship (you start with the original Strike Suit, but can unlock two more), the game is off, and it’s kill or be killed.

Once combat is joined (and I suggest you read the original review, linked above, if you’re unaware of how combat works in the game), you’ll see a small box labeled “Target Priority” that wasn’t in the original version of the game, and this is where the new targeting system comes into play. By simply hitting the “T” key, you can change this priority so that your target selection button will prioritize those targets. Originally, the target selection button chose important targets no matter what or where they were, regardless of their tactical importance in that given moment. NOW, if there are torpedoes attacking your frigate, you can cycle through priorities until you see “Torpedoes” and then quickly attack and destroy all of the torpedoes on the battlefield (if you can get to them in time). While this might sound tedious and cumbersome, it’s anything but, as using this new system just fell right in with the rhythm of the rest of the combat, and made quickly prioritizing and selecting targets a breeze. While it’s not as detailed as the targeting system as in, say, Freespace 2 (what is really), for this kind of purely-combat-focused game, it’s perfect. Whereas before, targeting the right enemies was frustrating, now it’s simplicity itself.

This isn’t as big a deal as in the story-based game Zero, since there aren’t any mission objectives to worry about, but honestly, I think that’s what ultimately makes Infinity the better game. While in Zero you had to worry about protecting this frigate or shooting down that shuttle, here in Infinity, you only really have to worry about your own shields and armor, because the longer you last, the higher your score. The higher your score, the more weapons and abilities you unlock, which makes the game even more fun. In the original game, success or failure was based on the outcome of the mission (or lack thereof), while here, success or failure is determined only by your score compared to your previous efforts and to those of others (the game has a built-in leaderboard fed from Steam, which is nice). Overall, the game’s more simple nature makes for a much more enjoyable experience.

While Infinity definitely improved my experience over Zero, some flaws from the original game remain, such as a lack of wingmen controls or questionable enemy AI. I also still have some trouble with the Strike Suit itself, since the thing is mostly a flying turret, and the difference between flight mode and Strike Suit mode can stil be a bit jarring. Hopefully future enhancements will make the Strike Suit more nimble, but given the game’s focus on arena combat this time around, the more stationary nature of the Strike Suit is more of an asset this time around, which is something of a welcome change (though I still want to see more agility on these mechas in the future). Also, the game can sometimes take a long time to load too, but oddly this didn’t happen with every run through of the game, and only happened on the initial load, whereas subsequent rounds loaded right up. While the lack of wingmen controls and such was a big problem in the larger story-based game, here it’s much less of an issue, as is enemy AI, but these are issues still worth noting. Regardless, this time they barely got in the way of my enjoyment of the game, if at all.

In conclusion, Strike Suit Infinity was one of the nicest surprises I’ve had in space gaming in a while. While I went in expecting similar frustrations to the original game, what I instead found was a breath of fresh air. The tight focus of the game, and the refinements brought along from its predecessor make for a quick, fun experience that I wasn’t expecting at all. It’s a blast simply jumping into a game and mowing down enemies without worrying about mission objectives and the like. Honestly, part of me wishes they would’ve released this game first, as Zero might’ve offered a different experience right off the bat had lessons been learned from this game first. Regardless, my enjoyment of Infinity is making me consider returning to Zero to hopefully finish it. That said, if you enjoy frantic, simple space combat with little overhead in the way of stories of mission objectives, then you’ll definitely enjoy Strike Suit Infinity. If you’re looking for plot development and the like, stick with Strike Suit Zero. Regardless of which you prefer, I hope you’ve enjoyed this review, and invite you to enjoy all of the screenshots I took below. Thanks for reading!

With a Little Help From My Friends… 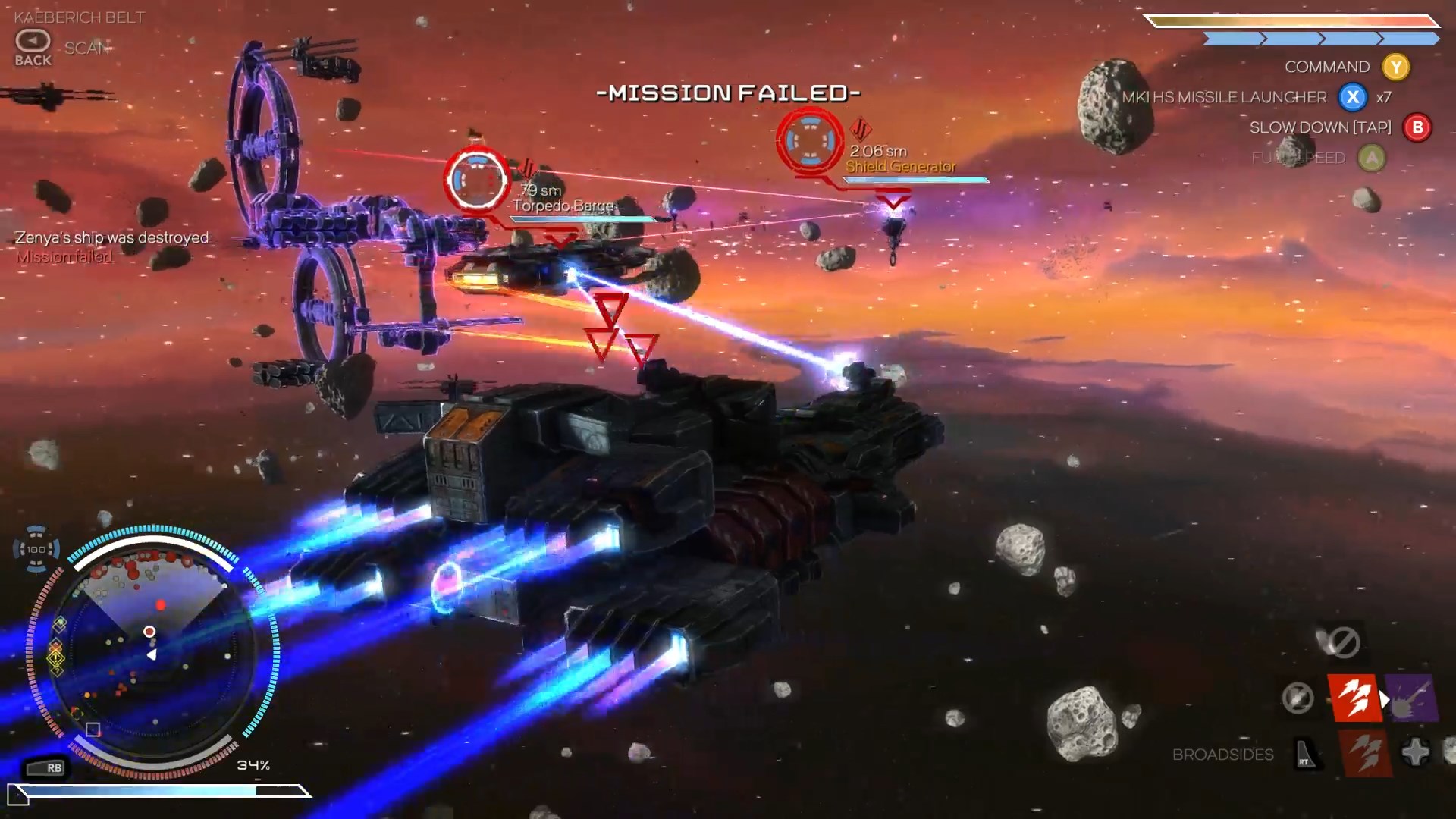 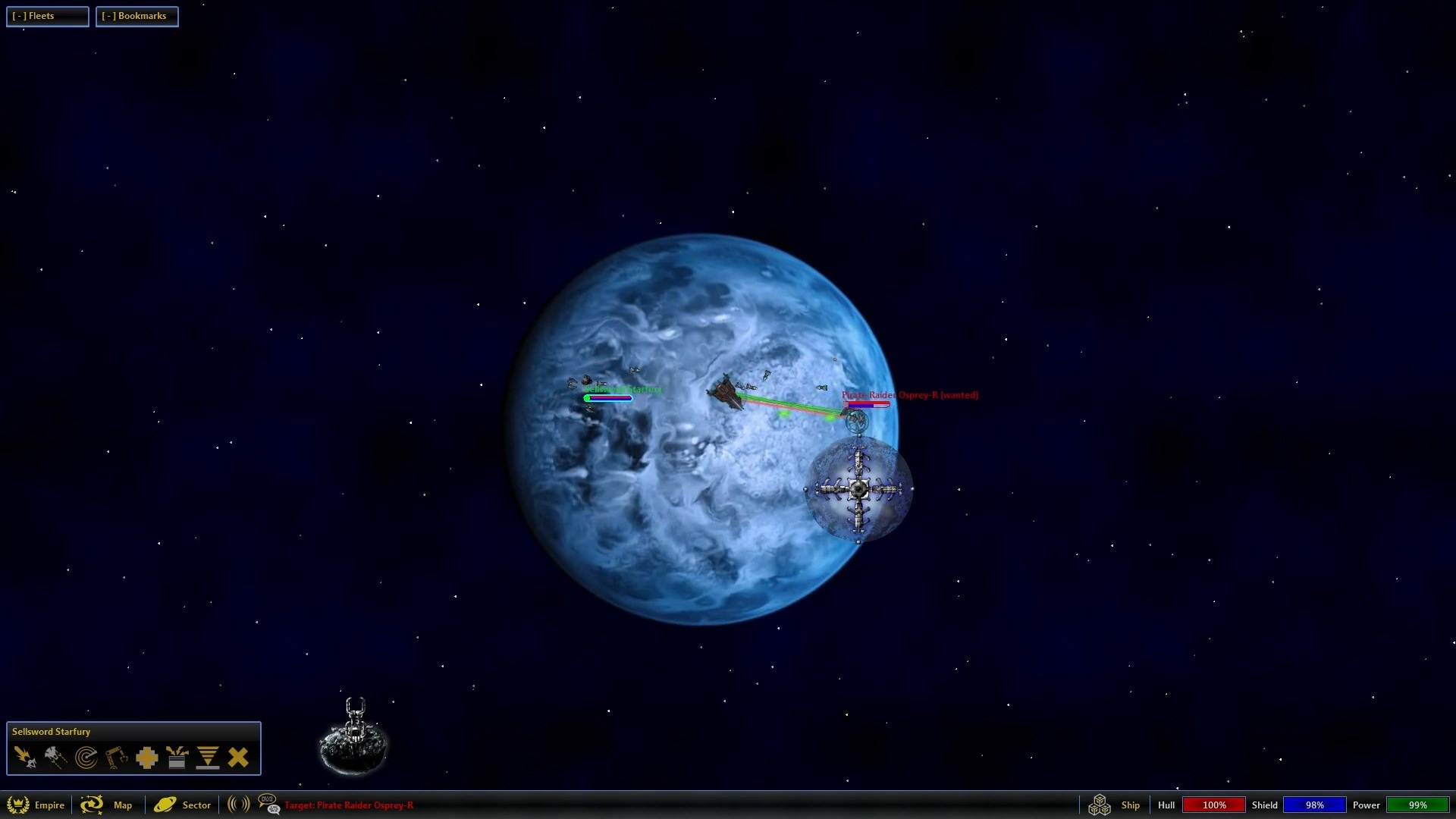 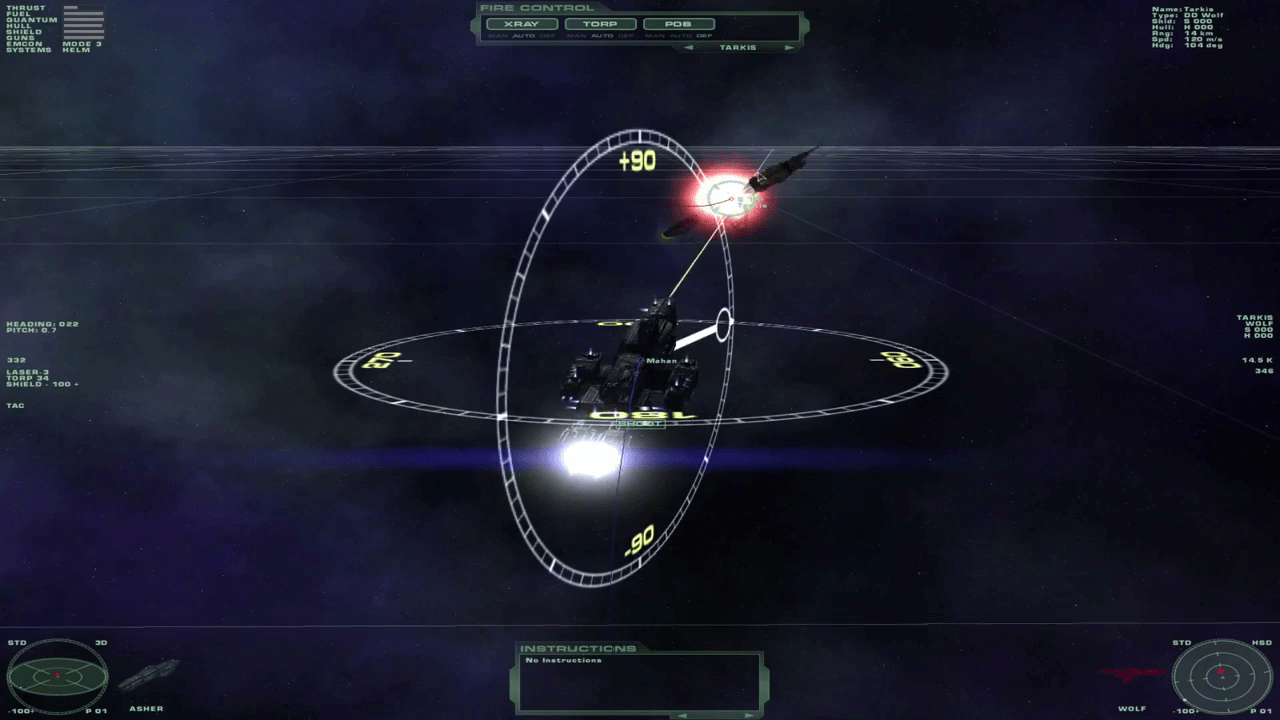 0 76
Let’s Play Starshatter: The Gathering Storm – Entry 2 – Back to Basics 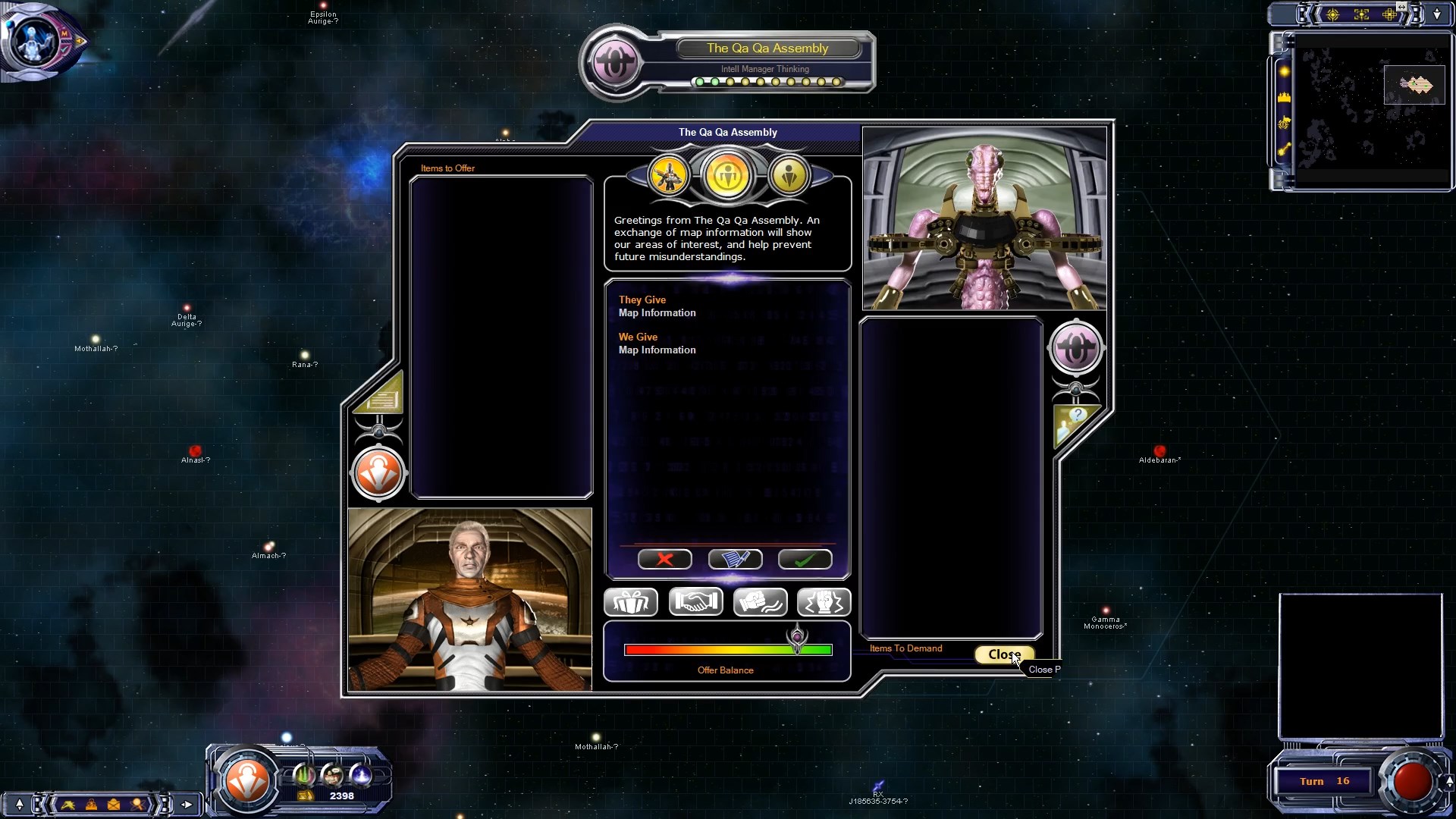