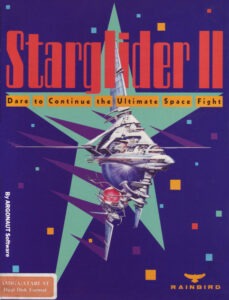 Welcome to another week of spacey gaming, my friends, and boy, do we have a lot for y’all. First up, this week’s game of the week is the insane shooter adventure game thing from 1988, Starglider 2, which is almost as confusing an obtuse as its predecessor. I also have several other videos for you this week, starting with a look at Landinar: Into the Void. Coming up later this week, I’ll have vids of Galactic Dominion, Lazy Galaxy: Rebel Story, AstroViking and, to close out the week, the triumphant return to TIE Fighter after being stuck on the same mission for, like, an entire year. Seriously. :)

On the podcast this week (Tuesday, 6:00 AM Pacific, Twitch, YouTube, Mixer), we’ll be getting up super early in the morning to talk to the folks behind the aforementioned Landinar: Into the Void.

Finally, this weekend (Sunday, 9:00 AM Pacific, Twitch, YouTube, Mixer), we had to reschedule our Star Trek: Bridge Crew! session, so join me as I gather with some other fans of the fantastic Greatest Generation podcast to make complete fools of ourselves on the bridge! ;)

0 55
I Was On the Game Wisdom Perceptive Podcast!